"The martial way is open to all with the resolve and inclination to walk it.  The martial way requires moral stamina, demands social consciousness, as well as physical endurance.  The individual embarking on this way must be brave and virtuous, and must possess a sense of commitment and a sensitivity to the values of the past." - Dave Lowry 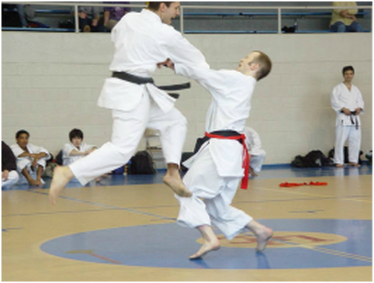 Andrew Bakoledis(53), 5th Dan
Chief Instructor, 33 years training
Began -1990   Shodan -1993   Nidan -1995   Sandan -1998   Yondan -2004  Godan -2015
JKA certified B Level Instructor, B level Judge. C level examiner. Graduated Master Mori's A Level Instructor Training program in New York City in 2006. Began training JKA at the UConn Karate Club with Sensei Robert Jacobs(7th Dan) and Margaret Thomas (6th Dan).   3-time selection for the U.S. National JKA Team, competing at the 9th, 10th, and 11th Funakoshi Gichin World Cup Karate Championships in 2004(Japan), 2006(Australia), and 2011(Thailand) and was an alternate for the 2014 Team competed in Tokyo.  As captain of the Men's Team Kata National Champions he, Mike Jacobs, and Joseph Vincente were finalists at the 2011 Funakoshi World Cup in Thailand.  Bako sensei was an assistant coach for the 2017 U.S. World Cup team in Ireland, working with the Junior Team and now a 2020 National team member in the senior division ages 50-54.  Sensei is a Senior Men's National Kata champion (40s and 50s) and has training in the arts of Judo, Jiu Jitsu, and Aikido.
​Mr. Bakoledis has a Bachelor's Degree in Applied Mathematical Sciences from UConn and Master's Degree in Education from Sacred Heart University.  He is licensed in Educational Leadership for School Administration. ​He has 27 years of teaching in Connecticut schools grades 6-12. He taught mathematics at Westbrook High School for 9 years where he coached the soccer, baseball team, and math teams. He taught math for 15 years in the Montville district at the middle and high school levels, coaching the tennis, soccer, and math teams. Andrew is now the Math Department Head at Norwich Free Academy. 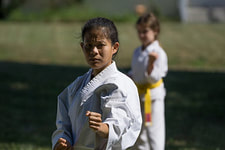 Mrs. Barrera has a Bachelor's Degree in Molecular Cell Biology and Spanish from UConn and a Masters degree in Molecular Cell Biology from Quinnipiac University.  She worked in pharmaceuticals for over 5 years in Connecticut.  Additionally, she has a Bachelors Degree in Nursing and works as a registered nurse giving care to hospital patients. Her tenacity in kumite is universally respected

John Listorti(56), 3rd Dan -  Instructor, 35 years martial arts training
Began - 1986   Shodan - 1991   Nidan - 1994   Sandan - 2000
John began his training at UConn in 1986.  He has been regularly teaching karate for 20 years. Additionally, sensei is accomplished with the long bo/staff and has training in the art of fencing.
Mr. Listorti has a Master's Degree from UConn and is a science teacher at Killingly High School with
28 years of teaching experience in the high school classroom. He is a practicing clarinet player for a local orchestra which performs regionally.
Mehrdad Haghpassand(57), 3rd Dan - Assistant Instructor, 23 years training
Began - 1999   Shodan - 2003   Nidan - 2007
Mehrdad is a chemist with a friendly demeanor whose effort to focus in the dojo is rivaled by his effort to balance life's responsibilities.